The Parade and Ceremony (P&C) and Dynamic Defence Display (D3) segments at the National Day Parade (NDP) 2017 celebrate our nation’s strength in unity and aims to rally Singaporeans to stand together to uphold our country’s sovereignty, defence and security as #OneNationTogether. The P&C segment brings together Singaporeans from all walks of life, from both the uniformed and civilian sectors, in a demonstration of will and commitment to secure and defend our home. The D3 segment, put together by the Singapore Armed Forces (SAF) and the Home Team, underscores Singapore’s commitment and ability to defend itself against a spectrum of security threats. As Singapore celebrates 50 years of National Service (NS50) this year, the P&C segment, involving about 2,000 participants from 31 marching contingents, will pay special tribute to national servicemen in recognition of their contributions as well as to their families and employers for their steadfast support for NS. The NS50 tribute at the P&C segment includes an NS50 tribute video, a dynamic transformation by the Youth Uniformed Group contingents to form the words “NS50”, and a Salute from the Nation where the marching contingents will salute our national servicemen, their families and employers, with spectators at the parade invited to stand to join in the salute in unison. Commanding the parade this year is also an Operationally-Ready National Serviceman (NSman), Lieutenant Colonel (LTC) (NS) Lim Wee Tee.

For the first time in NDP history, the signature bomb burst during the P&C segment will be performed by an all Republic of Singapore Air Force (RSAF) F-15SG fighter aircraft line-up, with two of the five F-15SGs flown by NSmen pilots. Singaporeans will also enjoy the largest military tattoo performance in NDP history comprising the Combined Band, the Silent Precision Drill Squad and for the first time, bagpipers from the Singapore Police Force (SPF) Women Police Pipes and Drums. They can also look forward to traditional celebratory elements such as the 21-Gun Presidential Gun Salute on the M3G military raft, the Feu-de-Joie, as well as the State Flag Flypast flown by an RSAF Chinook helicopter escorted by two AH-64D Apache helicopters. 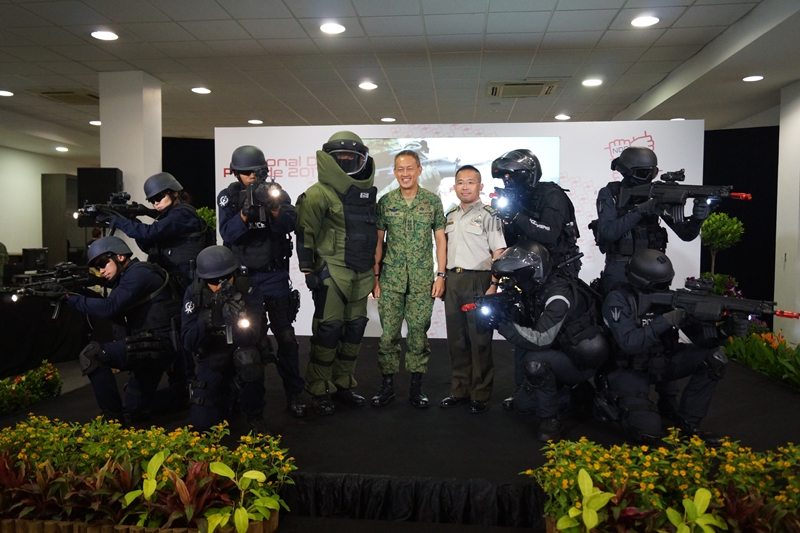 All the above images credited to National Day Parade 2017

NDP 2017 will see the high-intensity D3 segment making a return after a two-year absence. For the first time, the D3 will be showcased in two parts promising twice the action and excitement, along with the use of enhanced pyrotechnics. The first part (preceding the P&C) underscores the role of the SAF as the guarantor of Singapore’s sovereignty and independence. Singaporeans will witness an array of technologically-advanced assets from the Singapore Army, the Republic of Singapore Navy, and the RSAF – and the men and women who operate them – in a synergistic display of military might.

The second part (following the P&C) showcases Singapore’s whole-of-government and community approach in tackling security threats through a multi-agency counter-terrorism display shown for the first time in an NDP D3. It depicts how cyber security agencies deal with cyber-attacks, and how the SAF and the Home Team overcome multiple terrorist threats.

Singaporeans are encouraged to join in the celebration by tagging their photos, well-wishes, reflections or stories on their personal social media platforms and/or NDP social platforms as follows:

Twitter(@NDPeeps) and with the following hashtags:

For information on NDP 2017, visit www.ndp.org.sg or download the official NDPeeps mobile app available in the Apple App Store and Google Play Store.