Our Parenting World, Gor Gor and Di Di are so excited to know that they are going to see “The Very Hungry Caterpillar & Other Eric Carle Favourites” play. Both of them have read the award-winning children’s books by illustrator and writer, Eric Carle. They simply love it!

“The Very Hungry Caterpillar & Other Eric Carle Favourites” by Mermaid Theatre of Nova Scotia, Canada is a magical work of black light theatre that brings together the beloved tales of Eric Carle which includes “The Very Hungry Caterpillar, The Mixed Up Chameleon and Little Cloud”. The play is suitable for children 3 to 6 years old and it is presented by Act 3 International, Singapore’s leading Arts company. The children were invited to an exclusive one hour puppetry workshop with the cast before the show started. When the cast brought out the caterpillar, it was clearly a favourite among the young audience, the children were so happy to see it!

About “The Very Hungry Caterpillar” is an adventure story of a caterpillar, how he chomps away on his journey to metamorphosis! Starting out as a baby caterpillar eating anything and everything along the way, he changes into a beautiful butterfly at the end. The children get to experience and come up close to the cast and their puppets. The cast will demonstrate to them how they moved  the puppets and all the children had the opportunity to do it.

Di Di happily told the cast that he likes the caterpillar! Another of the audience’s favourite is the chameleon where the cast demonstrated how to move the puppet and shown the audience the trick of making the chameleon struck out its tongue to catch the fly in the play.

About “The Mixed Up Chameleon”, is a reptile who doesn’t think he’s special changing colours everyday. He finally embraces his uniqueness only after an identity calamity happens when he decides to emulate the different animals he meets at the zoo. This is how it will look like in the actual play where everything on stage will be in the dark. The performance will be conducted in the dark where the use of UV lighting, a dark stage, black curtains and fluorescent costumes to create a magical visual feast.

The audience will not see the cast as they will be dressed in black and the use ‘black light’ enables puppets and props to appear on stage as if they are animated on their own. Di Di and his friends get to do role play where Di Di was the chameleon. The children were having fun doing their role play. 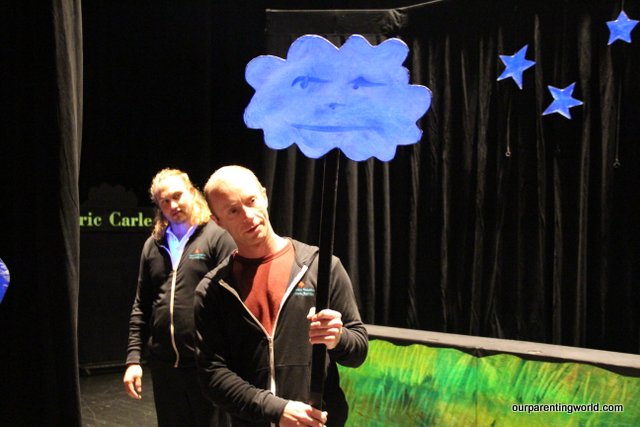 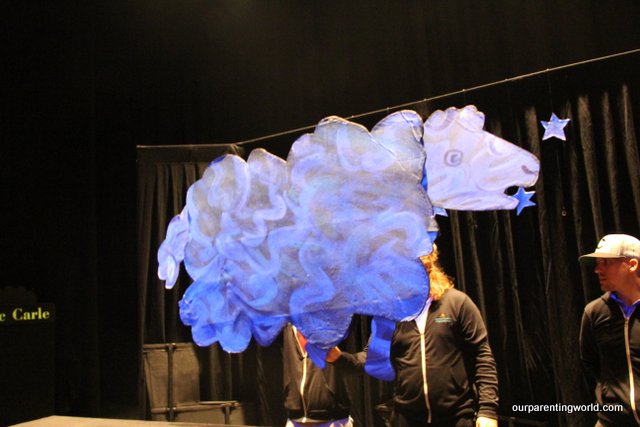 “About the little cloud, it is a charming little tale of how it decides to stray away from his fellow mates to go on adventure that finds him turning into various objects like a sheep.”

The cast shown the audience how they controlled the puppets from behind. 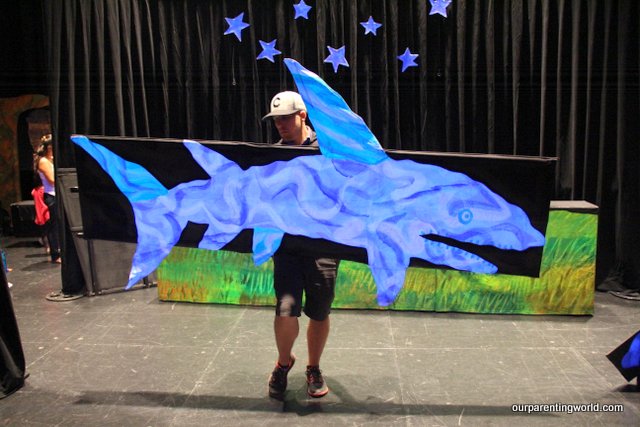 The back and front of the shark.

“The little cloud even turns into a shark!” 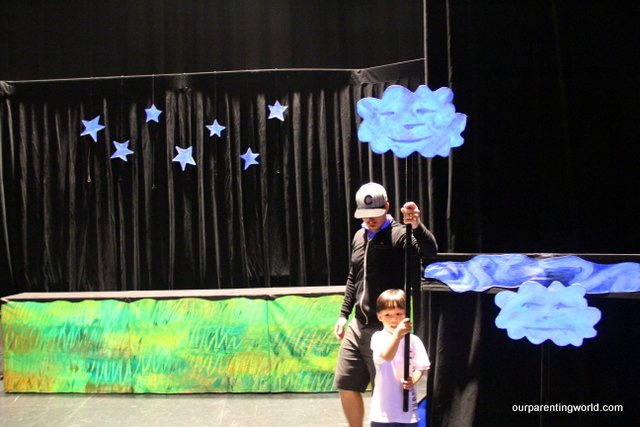 Di Di using a longer pole to show that the little cloud had moved up higher in the sky.

The puppet workshop is very meaningful for the children as they get to go behind the scene to see how it is done. They get to see how their favourite puppets come to life under the hands of the professional and passionate cast.

Not only the children had fun exploring the puppets, the parents too. We learnt so much about how much work, effort and co-ordination needed to make the play so interesting and enjoyable to the audience. Thank you to the organisers, Act 3 International and Mermaid Theatre of Nova Scotia, Canada for having us and bringing such a wonderful performances.

In addition, a big warm hello to all the lovely parents and children we met at the workshop! We all had a good time!

Hurry, catch the performances by 5 October:

Credit Card Payment  only In Person: At authorised SISTIC agents