Our Parenting World is pleased to have with us, Ms Dan Luo, Managing Director LEGO Singapore to share with us her valuable insights on the learning power of LEGO and all LEGO fans will be happy to know that LEGO has plans to open more LEGO Certified Stores in Singapore and also in the region. Please read on to find out more:

1. Can you share with us how LEGO can help a young child in his/her development? What’s your advice for parents who are thinking of using LEGO to facilitate learning in their child?

We are not experts in the area of child development. However, we believe that our biggest contribution is through inspiring and developing children as they experience the joy and learning opportunities that creative play provides. Play in general has a profound impact on the cognitive, social, developmental and academic skills of children. Play also stimulates learning abilities by fostering creativity, which again supports critical thinking, sparks curiosity and facilities learning by doing.

This is the primary focus of the LEGO group.

Learning is an integral part of the play experience with any LEGO product, but it is not explicit. There is no right or wrong way to play with LEGO bricks – these bricks offer endless creative possibilities.

Take the example of the LEGO duck – with just six LEGO bricks, hundreds of different ducks can be built! Yet, every variation is still a ‘duck’.

LEGO sets thus allow young minds to explore different universes, many of which are of their own imagination and making. In the process, children learn to count, recognise colours and understand the concept of spatial orientation.

Children learn when they imitate. Children see mothers preparing their meals, and then try to imitate what she is doing through his or her toys. It is through ‘imitation’ that children can start to learn and understand the adult world. And in the process, their motor and language skills are also developed.

A child will be encouraged to look at the world around them, and then recreate it with LEGO bricks. When role-playing with LEGO bricks, they build stories, train memory skills and practice their motor skills. The process could also help a parent to build a world of learning numbers and counting through easy games with LEGO bricks.

Yes, we plan to open more LEGO Certified Stores in Singapore and also in the region.

Customers will enjoy a more exciting and well-rounded LEGO experience in a LEGO Certified Store (LCS). Firstly, a LCS is outfitted according to the strict guidelines as laid down by The LEGO Group. All the fixtures and furniture in a LCS are designed by The LEGO Group. Secondly, the LCS offers unique features that cater to promoting creativity and encouraging free play, in an immersive environment to continuously engage the customer. These unique features are :

All the above answers are from Ms Dan Luo, Managing Director LEGO Singapore.

Thank you Ms Dan Luo for taking our interview!

We are sure many of us, LEGO fans are thrilled to be able to hear from you. Singapore’s first-ever LEGO® Certified Store (LCS) opens at Suntec City Mall! Our Parenting World, Gor Gor and Di Di have been waiting for this day to visit the store ever since they knew about the good news. Being huge LEGO fans, they wouldn’t miss this especially so when Daddy and Mummy promised to buy them LEGO toys at the store. The boys were at the launch to celebrate the official opening of Singapore’s first ever LEGO® Certified Store! It is no surprise that all the children quickly settled down eagerly at the LEGO play area and started playing and building with the LEGO pieces. Not forgetting to take photos with some of our favourite LEGO characters. 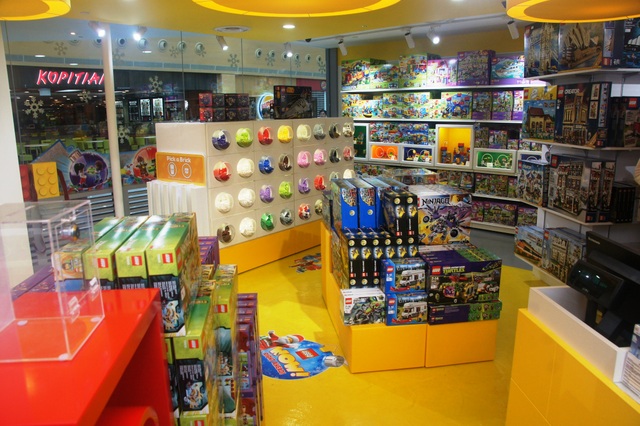 The LEGO store is managed by Bricks World which is located on the third level, Tower 3 at Suntec City Mall. 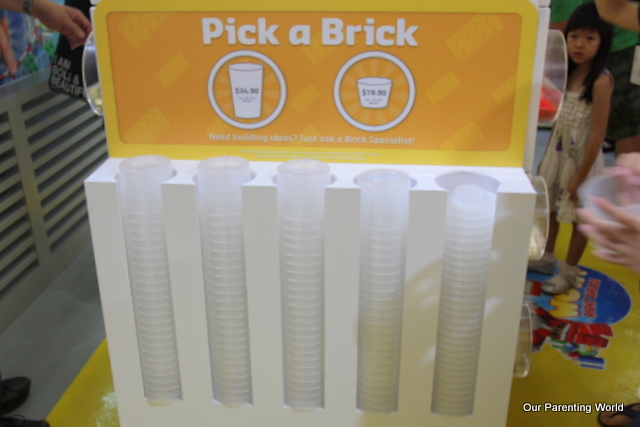 One of the popular elements of the store will feature The Pick-a-Brick Wall which comprises of a custom-built fixture with round canisters. Each of the canister will be filled with LEGO bricks to enable shoppers to build a LEGO model of their own choice and imagination.

This will give shoppers an unique experience to hand-pick and select LEGO pieces in different shapes and colours to fill up their containers. “The new LEGO store is so cool! I get to pick the LEGO pieces and fill up the container to bring home to build my very own LEGO creation.” 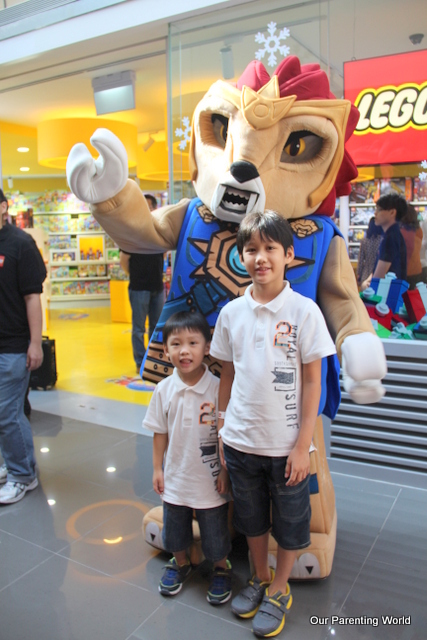 Gor Gor and Di Di were thrilled to see Laval from Chima. We foresee we will be visiting the store very often and Gor Gor has done well for his School exams and he requested to collect the complete set of LEGO Hero Factory Invasion from Below series as a reward for his hard work. Okay, considered it done!

It offers the following unique features that inspire and develop the builders of tomorrow :